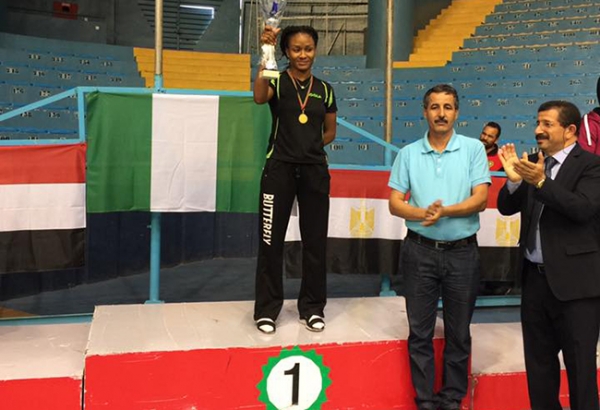 Several years after ruling the continent, Nigeria’s Olufunke Oshonaike yesterday turned the clock back to emerge as the new African champion in the women’s single event of the 2016 ITTF Africa Senior Championships in Agadir, Morocco. As the second seeded player in the competition, Oshonaike has never beaten the young Egyptian in the last two years but the tide turned in favour of the Nigerian as the North African tasted the first defeat in the continent to surrender the title.

From the start of the encounter, Oshonaike took charge taking a 2-0 lead but the Egyptian restored parity at 2-2. Oshonaike then decided to play with a lot of caution and tactics which eventual confused her opponent who finally succumbed to the more experienced Nigeria.
To emerge as the new African Champion, Oshonaike won (7-11, 11-13, 11-5, 11-9, 7-11, 7-11).

An elated Oshonaike told SportingLife after the encounter that she never doubted her ability. “I knew it was going to be tough because being the African champion and she has been unbeaten in the last two years. I just told myself to go out there and have fun and show my experience and when it started working I gained more confidence. But when the match was 2-2 my coach, Segun Toriola told me not to give up and I kept on going and it worked for me at last. This victory means a lot to me that I can still become African champion despite my age.

“It shows that nothing is impossible regardless of age inasmuch as you put your mind at it. I am so happy despite the challenges of making it to Morocco. I feel great and I am so excited that I can still do it and this is also an inspiration for girls that no matter your age, you can achieve whatever you put your mind into in life,” she said.