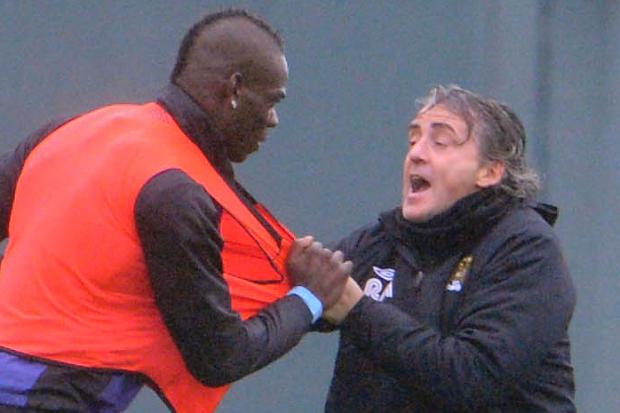 Manchester City striker Mario Balotelli is one of the most unpredictable players in footballing history, says former City star Rodney Marsh. Balotelli and manager Roberto Mancini reportedly had to be separated after a bust-up at the club's training ground. "Balotelli is a maverick, a fantastic footballer, and you know at some stage he will let you down," said Marsh.

"Roberto Mancini is also very flamboyant and volatile. Those two are incendiary." Balotelli, 22, has been involved in a series of controversies since his £24m move from Inter Milan in August 2010, but Marsh said he could still stay at the club. "I think Balotelli is one of the most unpredictable footballers in the history of football," said Marsh, who scored 36 goals in 118 appearances for City between 1972 and 1975. "Trying to predict what he is going to do is folly.
"But my feeling is, incredible as it sounds, that Balotelli will start against Watford in the FA Cup on Saturday and probably score a couple of goals.
"Of course they could patch it up. Equally he could be chucked out of the door tomorrow and be back at an Italian club."

Former West Ham and Charlton manager Alan Curbishley said the dispute between Italians Balotelli and Mancini detracted from City's hopes on the pitch.
"The big problem the two of them have got is that we are reading about them for all the wrong reasons," he said.
"You don't get something like this coming out of Manchester United, Arsenal or Chelsea. It just seems to be Manchester City at the moment and they have got to resolve it."

Ex-England international Marsh believes Balotelli is a maverick who needs careful management. "I love Balotelli. The only question is whether the managers he plays for can handle him," said Marsh. "It's simple for me, you either love him, and cuddle him and embrace him, or you dump him. I thought he would have been dumped about six months ago. I'm shocked that he's still there now."It's just one of those dynamics that comes along from time to time - two personalities clash. It's like a man and a wife constantly arguing and bickering.

"They are both incredibly passionate, brilliant at what they do, are champions, but the chemistry between the two just doesn't seem to work."
Mancini resolved a dispute with striker Carlos Tevez, who did not play for City for six months after the manager claimed he failed to warm-up in the 2-1 defeat at Bayern Munich in September 2011, but Marsh said this controversy was different.
"I don't think you can possibly compare Tevez and Balotelli as personalities," he said. "Balotelli is like a let-down balloon. You never know what he's going to do or when he's going to do it. That's on the pitch as well as off it, whereas Tevez has been a hard-working reliable player that gives 100% at every time to the team.
"For every two things that Balotelli does great, he does three things that are harmful to the team. I thought his attitude against Manchester United in the first derby of the season, when he started over Tevez, was very poor. In the end I think it cost City three points. If City lose the Premier League by three points, that's how destructive it can be." Former Manchester City midfielder Dietmar Hamann says the latest incident shows Mancini is "running out of patience" with the striker and told BBC Sport: "I can't see him having a future at the club."

However, Hamann believes City could benefit from losing Balotelli, and explained: "We musn't forget that when he got sent off against Arsenal in the last six games where he didn't play - he only featured for 15 or 20 minutes in the last game - they won all six. "So if it wasn't for him being sent off against Arsenal I'm not sure whether City would have won the league last season. I think the team wanted to prove a point to the manager that 'we don't need him'.

"It's got to a stage now where it seriously harms the reputation of the football club. These stories go worldwide. First and foremost the manager has to make a decision."
City have declined to comment, although Mancini will be expected to answer questions about the incident at his news conference on Friday morning.
In December, Balotelli was set to take City to a tribunal over a two-week fine for missing 12 games last season because of suspensions.
He later dropped the action and accepted the punishment, prompting Mancini to say he was willing to give the striker another chance.
In November, Mancini said that he had no intention of selling the player , who scored 17 goals in all competitions for City last season but was sent off twice.