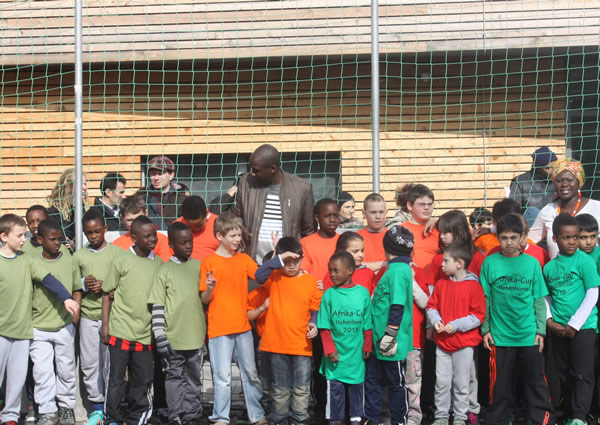 The weekend of April 12th - 14th 2013, African Day was celebrated in a sub division called Hohenhorst, (a suburb in Hamburg, Germany) There were lots of activities for both parents and kids.  Among the activities was soccer competition for kids, art drawing, cooking and sale of artifacts.

The soccer game featured a mini-African cup competition which all the kids participated in and enormously enjoyed.  It showed them team spirit and everybody who played was a winner. A Hip Hop dance crew also performed during the half time soccer game. Deyon Martins further energized the crowd with his Afro-Pop music.  The kids were dancing and celebrating to his wonderful tunes.

The end of the Friday show featured a viewing of an African movie called No Time To Die.  Everybody who attended watched the film. The Saturday program started with a fashion show which featured clothes from different regions of Africa. The presenter, Elizabeth Boateng, described the clothes being displayed

Then there were opening speeches from actress, Dayan Kodu, and Irene Appiah, from the Board of Education in Hamburg.  After which was a short film called Uwe & Uwe. The Saturday show also featured West African drumming, Kora guitar playing by Saliou and the group Djante Bi. They presented spectacular dance choreograph/ music from Senegal, Gambia, Guinea Bissau and Guinea. The Djante Bi group consists of four drummers and six dancers from Ivory Coast, Senegal, Guinea, Togo, Ghana and Germany.  The audience was elated

During the musical break, there was African food, Jewellery display, and snacks.

The end of Saturday show saw DJ Arthur performing different beats such as Azonto, Highlife, Reggae and Afro beats.   Over all it was a wonderful and successful show.  The organizers deserve two thumbs up.

Article by Paulina and Maame