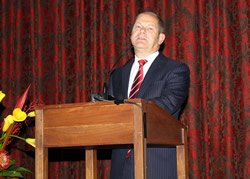 Africa is undergoing rapid political, economic and social change. The majority of the people are demanding good governance, rule of law and respect for human rights. Responsible new governments are assuming leadership in an increasing number of African countries and are being monitored through active civil society.

The “Afrika Empfang” is a yearly event that brings African Consuls in Hamburg and it surroundings together to meet with the Mayor of Hamburg to show their appreciation for the cordial relationship that exist among them.

Since the start of the new millennium, Africa’s economy has been growing at a fast pace, above average in global comparison, besides the continent is becoming ever more integrated into the global economy.

The Mayor of Hamburg, Olaf Schulz used the occasion to speak on bilateral trade relationship between Germany and Africa and emphasize on the perfect partnership agreement between Dar Salam and Hamburg.

The event which is organized by the Consulates brings together Entrepreneurs, Media practitioners, Politicians, Professionals and a section of the African community.

At Lindner Hotel and Resort, Hagenbeckstraße150, Hamburg, where the occasion was organized, the Mayor “Burgermeister” challenge the gathering to think Global and act Local.

Consulates represent one country in another country by acting to assist and protect the citizens of the consul's own country, and to facilitate trade and friendship between the peoples of the two countries.