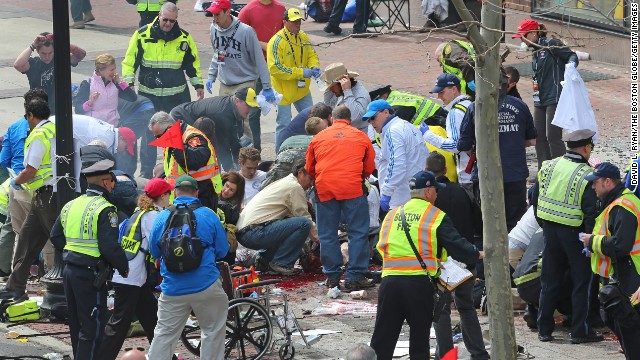 Blasts near the finish line of the Boston Marathon killed two people and injured more than 20 others Monday, Boston police said.

"It felt like a huge cannon," a witness told CNN about one of the blasts.

The marathon itself, on its Facebook page, referred to the blasts as bombs. Authorities did not say immediately what caused the explosions.

Massachusetts General Hospital said it was treating 19 injured people; Tufts Medical Center reported that it was treating nine people. Combined, that brings the number of injured to at least 28. Police reported 22 people injured.

The explosions sent smoke billowing into the air at Copley Square, turning a site of celebration into a mess of destruction.

Crowds had gathered in the area to watch the runners.

Out of an abundance of caution, the Lenox Hotel was evacuated, the Boston Globe reported, as authorities looked into possible security concerns.

"We are currently in contact with federal, state and city officials," Massachusetts Gov. Deval Patrick wrote on Twitter.

Other cities, including New York and Washington, tightened security as a result. Following standard protocol, the White House cleared out an area in front of the West Wing.

"If you see something, say something," Mark Boughton, mayor of Canbury, Connecticut, wrote on Twitter. "All cities will be on a heightened state of alertness per Homeland Security protocols."

Mike Baingon, who works at the Atlantic Fish Company in Boston, said an explosion took place in front of the restaurant and that he was right by the front door at the time.

The explosions occurred at about 2:45 p.m., more than two hours after the first of the race's nearly 27,000 runners had crossed the finish line, CNN Producer Matt Frucci reported.

The race was halted as was subway service into the area.

Troops from the Massachusetts National Guard were assisting police as well.