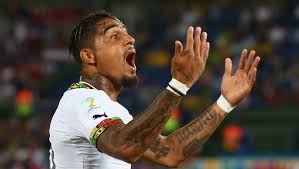 After masterminding the transfer of Joseph Paintsil from Tema Youth to Ferencváros and to Genk in Belgium and also Jonah Osabutey from Tema Youth to Werder Bremen in the German Bundesliga, Emmanuel Gyasi and his partners are set to launch the next big thing in terms of football development in Ghana. 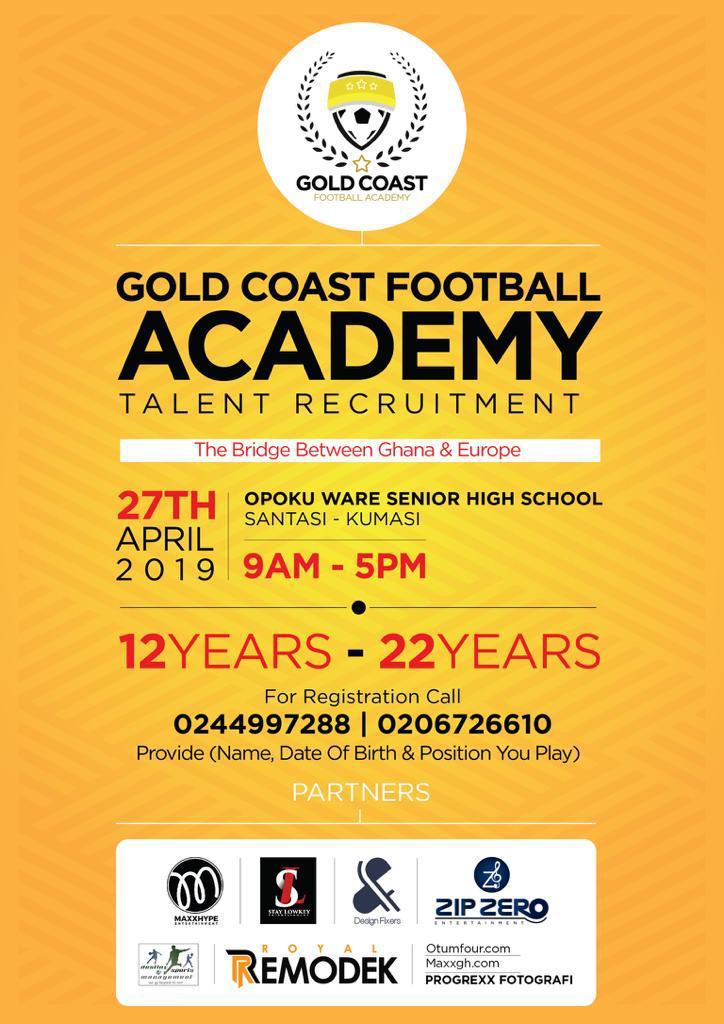 Gyasi, a football enthusiast and a top FIFA intermediary will be in Ghana to supervise a talent hunt event set to start in April this year.

The young and visionary FIFA Intermediary seeks to use the platform to unearth raw talents and place them in the best development centers across the world to help them realise their dreams.

His partners are seeking to set up an ultra-modern academy in Ghana with the name GoldCoast Football Academy from the top talents they will identify from the talent hunt exercise.

With free entry for every young player and the only qualification being one’s talent, the OWASS Park is expected to bleed with a lot of exceptional talents when the exercise finally starts.

In the video below, Emmanuel Gyasi explains the vision and mission of Gold Coast Academy as well as the modalities of the exercise slatted for next month.

Source: Football made in Ghana

The favorites have proved their way into Group D: Egypt and Ghana reached the quarter-finals at the African Cup
Recruiters Egypt and Ghana were the last teams to reach the quarter-finals at the Africa Cup in Gabon. In group D, the seven-time Cup winner beat 1-0 (1-0) against Ghana. Egypt's Mohamed Salah of AS Roma was the scorer. The tournament has been concluded for Uganda and Mali, who lost 1: 1 (0-0).

The first quarter-finals will be held on Saturday, Burkina Faso and Tunisia, as well as Senegal and Cameroon. Ghana is the second in Group D on Sunday against the Democratic Republic of the Congo.

Hosts Gabon with Borussia Dortmunds striker star Pierre-Emerick Aubameyang had already been eliminated in the preliminary round. Also title defender Ivory Coast with Salomon Kalou of Hertha BSC had failed. 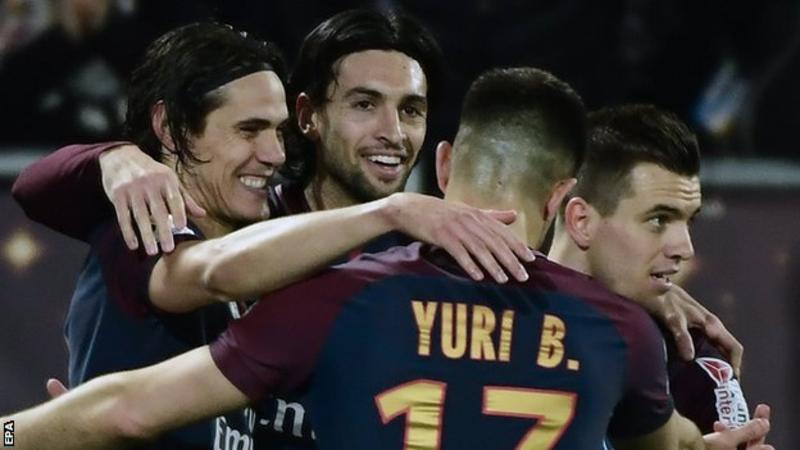 Paris St-Germain continued their domestic dominance by winning the French League Cup for the fifth successive time with a comfortable victory against Monaco.

The Qatari-owned club have now won 11 of the 13 major domestic trophies on offer in the past five seasons and remain on course for their third treble in four seasons.

Unai Emery's side are 17 points clear of second-placed Monaco in the league, while they are tied at 1-1 with Caen after the first leg of their French Cup semi-final.

Cavani converted a penalty given for a foul on former Monaco forward Kylian Mbappe, although there was a three-minute delay amid confusion when referee Clement Turpin went to the VAR before confirming the decision.

Mbappe's stunning pass set up Di Maria for the second, splitting the Monaco defence with a ball from inside his own half, allowing the Argentine to fire under a weak attempted block from keeper Danijel Subasic.

Monaco thought they had a lifeline when Falcao bravely beat PSG keeper Kevin Trapp to a right-wing cross to head in.

However, the referee decided he needed VAR help again and, after another two-minute wait, the effort was ruled out for a tight offside call.

Monaco continued to improve after the break, coming closest to halving the deficit when former Manchester City youngster Rony Lopes clipped the crossbar.

Despite that chance, PSG were always in control and never looked in danger of relinquishing their lead and Cavani sealed the win in the 85th minute. 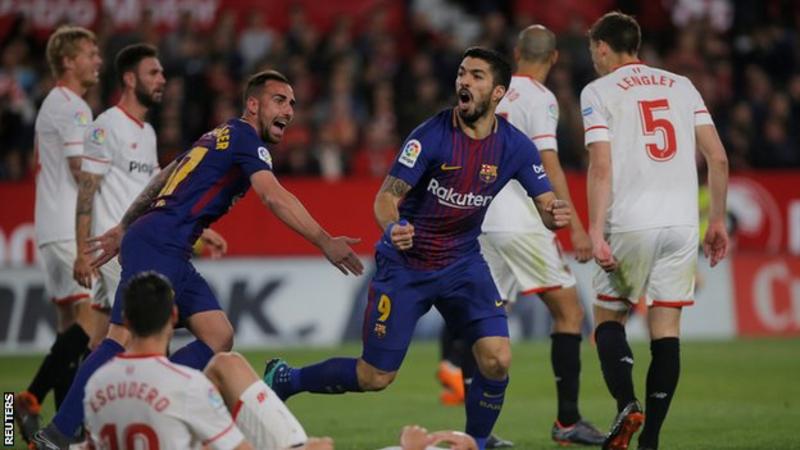 Substitute Lionel Messi scored a sublime 89th-minute equaliser as leaders Barcelona came from 2-0 down to preserve their unbeaten La Liga record. Sevilla looked set to inflict a first league defeat on Barca for 11 months after goals by Franco Vazquez and Luis Muriel.

Luis Suarez pulled a goal back from close range in the 88th minute before Messi equalised moments later.

Barca's leading scorer curled home his 26th league goal from outside the area.

Messi had missed both of Argentina's friendlies during the international break because of a hamstring injury and was left out of the starting line-up for this game.

Barcelona are 12 points clear at the top of the table although Atletico Madrid will cut the gap to nine if they beat Deportivo La Coruna on Sunday (19:45 BST).

Sevilla, who are sixth in the table, wasted a string of chances to seal victory when 2-0 up.

They have not beaten Barcelona since October 2015 although they will get another chance to overcome Ernesto Valverde's side when the teams meet in the Copa del Rey final on 21 April.

The teams could also still meet in the Champions League.

Barcelona are chasing a European and domestic treble and host Roma in the Champions League quarter-final on Wednesday, while Sevilla entertain Bayern Munich the day before.

A Nigerian Millionaire Dr Mike Adenuga Jr, the Chairman of Globacom has on Monday redeemed his promise he made to reward the super Eagle Coach, Stephen Keshi with two brand new cars for leading Nigeria to victory during 2013 Africa Cup Nations earlier this year in South Africa.

It was all about the second half. Kwesi Appiah went into the dressing room with the players and returned with no changes in personnel. But they came with a change of mind.