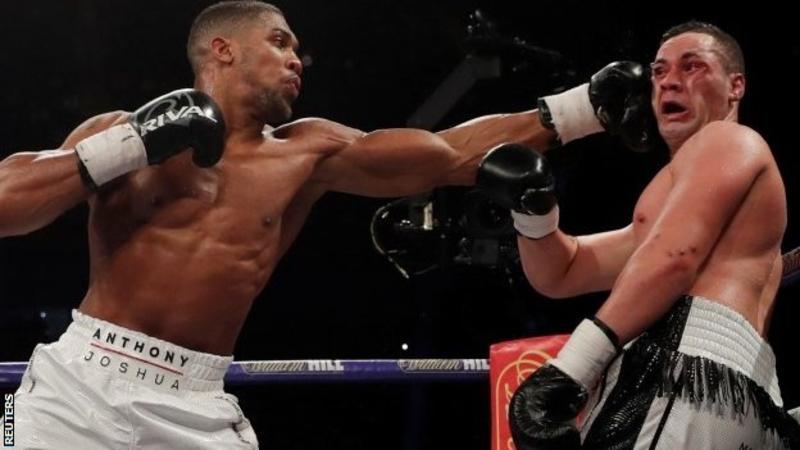 Anthony Joshua unified the WBA, IBF and WBO world heavyweight titles with a controlled performance in a unanimous points win over Joseph Parker at a tense Principality Stadium in Cardiff.

The Briton, 28, used his left hand to telling effect throughout an intriguing affair, in which New Zealand's Parker displayed swift hands, movement and impressive durability.

But his WBO title always looked like it would end up round Joshua's waist as a significant points gap opened up, with the favourite landing a hard left uppercut in round eight and two stinging left hooks early in the 10th.

Joshua becomes unified world champion - with three major belts, along with the IBO crown, and only the WBC title left to claim

'Finesse' - How the night played out

Joshua raised his right hand on ring announcer Michael Buffer's reading of the cards and he now holds three of the four recognised world titles. Parker looked to the sky.

But the 26-year-old New Zealander played his part in a compelling evening and brought colour to an intriguing build-up.

Never before had two world champions from the glamour division met to unify titles on British soil. For the away fighter this was a whole new level of scrutiny; for Joshua, it was a third consecutive stadium fight, with a cumulative 250,000 seats sold in the process.

Each fighter walked to the ring to an accompaniment of strobe lights, flames and fireworks, with the estimated 78,000 in attendance providing a glittering background as smart phones lit up the tiers.

When the bell rang, Parker looked sharp, flicking his left jab to keep his opponent at bay and maintaining a guard with just his right hand, compared with two high hands from Joshua.

Afterwards, Joshua pointed to a bout he felt came down to "boxing finesse" and there is no doubt he used the jab and repeated left hooks tactically to stave off his opponent's threat.

It took until the halfway stage before either man truly began to load their shots, as early respect gave way. Parker, stung early in the sixth, gave chase and landed his own left hand from a crouched position.

The beaten man admitted he lost to a "better champion" but he at least showed the "granite chin" his camp had built much of their hope on beforehand.

Unlike Joshua, Parker has never been dropped as an amateur or a professional and he showed his durability in sucking up two hard left hooks early in the 10th.

This was a more chess-like Joshua. The knockout artist Britain has grown to love was forced to show us poise over 36 minutes, although the result never really looked in doubt.

Those close to Joshua describe his tendency to return from a fight with improved knowledge of what he wants to change about his preparation next time.

This time, weight was an issue and cutting his lightest frame since 2014, he looked more comfortable than when he stopped Carlos Takam at this stadium in October.

He maintained a healthy pace late on and his two-inch height advantage was expertly deployed as the "glass chin" Parker's camp claimed to believe the home fighter possessed never really came under substantial threat.

There were forays from Parker but each time he was forced to dive in, leaving him exposed to a couple of left uppercuts and hooks.

Some on social media criticised the officiating for preventing either man from fighting at close quarters. The frustration was understandable but, with Parker repeatedly diving in, his attacks often produced a grapple that needed breaking up.

Joshua seemed to care little, as he took the chance to call out WBC title holder Deontay Wilder - who turned down an invitation to be ringside. The already loud calls for them to meet will grow louder. Can either really turn down the chance to become the first man in history to hold all four titles?

Only boxing politics, purse splits and ego can get in the way. Wilder will probably point to the fact his rival failed to score a stoppage. But Joshua's camp might just as well feel going the distance is a positive if such a landmark bout is to come next.

The knockout run has ended. But Joshua's rise to supremacy looks increasingly difficult to stop.

I thought it was an assured performance from Joshua. He clearly thought early on that he may be going the distance and adjusted his pace to suit.

I feel he could have made more potent use of the left jab, as when he did throw it frequently it set up his power punches with the right hand and left hook.

We also have to consider that Parker for long periods, as game and as resilient as he was, appeared to be in damage limitation mode.

I can imagine Wilder and his camp will have taken much confidence from tonight's showing by Joshua, but a look at Joshua's history as an amateur and a pro suggests he will learn much from this display and he is highly likely to return a better fighter.

Indeed, the performance might have encouraged Wilder to put pen to paper quicker than he might otherwise have done.

Anthony Joshua speaking to Sky Sports: "This was about boxing finesse - I stuck to my word. I know what it takes to be a champion. Joshua Parker said he wanted a war, but it was all about boxing finesse. The main thing we cannot forget is that I am the unified heavyweight champion of the world."

Asked if he would fight in the United States: "I'm not interested in coming to America. All these years, we've gone to the States, people have spent a lot of money following British boxers over there. [But] we can do it in London, Cardiff. We are staying right here.

"I want Wilder. Or Fury. Get him [Wilder] in the ring and I'll knock him spark out."

Joseph Parker: "I want to go back and come back stronger. I have no regrets, we take it on the chin. We'll be back again and we'll work harder to come back. I would love to have another go."

Asked if interruptions from the referee disrupted his tactics: "We could have worked inside more, we can't change it. Of course, I'm young, fit and strong. I'm fit to go 12 rounds, thanks to all the New Zealanders here and back home. He [Anthony Joshua] is a good big man and was better on the day. We'll be back."