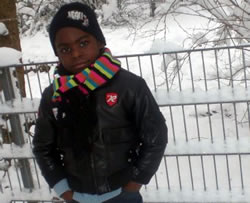 This is a terrible tragedy and a big shock to all soccer loving funs and Hamburgers in general, The seven-year-old boy Kornlan Effrahim F died on Friday night during a football game, in the Hamburg district of Harburg.

The young players, in the course of lifting the movable goal posts, which weighs over 100 pounds, it fell mysteriously on the young players head. All efforts to save his life by the paramedics failed. A little later the little soccer player died in a nearby hospital.

The youth leaders on Saturday wiped the traces of blood ofo the field and carried the goal post away from the field. Grieving children, teens and adults put flowers, and lighted candles in his remembrance.

The vowed never again shall a ball fly into the goal posts which killed the little soccer player from Harburg. "Effie," as friends usually call him, become a member of the football club "Dersimspor “about 18 months ago and played in the F-youth.

"He was a very talented," said youth leader Erkan Kose (40). "As a striker, he was particularly strong." They usually train every Friday on the sports field at the Baererstraße. The last training unfortunately was to be his last.

"Effie" finished training with the F-Youth Team around 18 Clock, but decided to stay after the game, to watch the bigger brother (Manasse) who plays for the C-Youth team.

The coach as usual sends some of his young players out of the dressing room back to the field to re position the goal posts. It is then the unforeseen occurred.

The youngsters called their coaches; who in turn immediately alerted the emergency services. But when the ambulance arrives a few minutes later, the boy was already dead, well the paramedics were able to bring the young soccer star back to life.

The seven-year-old boy could not survive the severe skull fracture, and felt into COMA. The doctors did all they could but finally he gave up and died. What a tragedy?

His football club has until further notice canceled all sporting activities.

The mother is Madam Akossiwa A, Father is Mr. Joseph A and brother Manasse, The Club has started a fundraising campaign for the “Effi” family, and wish all sympathizers’ shall contribute immensely.