Tyga was born as Michael Ray Nguyen-Stevenson on November 19, 1989 in Compton, California to Vietnamese and Jamaican parents. His stage name, Tyga, stands for Thank You God Always. At the moment Tyga is a member of the Young Money Crew as he is signed to Young Money Entertainment, Cash Money Records and Universal Republic Records.

The first album by Tyga was “No Introduction” which was released on June 10, 2008. One of the songs from this album was used for the video game “Need for Speed: Undercover”. Some other songs were also used for a few other big productions.

He has released many mix tapes including the most famous one “Fan of a Fan”. This mix tape featured Chris Brown, Bow Wow and Lil’ Wayne amongst others. The hit song “Deuces” feat. Chris Brown was released from this mix tape. It charted high on the Billboard Hot 100 and was even nominated for a Grammy Award. It also appeared on Chris Brown’s album “F.A.M.E”.

Tyga’s second album release is going to be “Careless World: Rise of the Last King” which is also the first time release on Young Money Entertainment. The album will drop in February 2012. The mix tape “BitchI’mTheShit” is a foretaste of for the up-coming album.

The most successful single release is “Rack City” which peaked at nr. 8 on the US Billboard Charts and the music video has received nearly 20 million views on YouTube

If you are looking for an event to attend this easter sunday, March 31st, then Planet Pauli is definetly the club to be at. All the way from Nigeria, Wande Coal of the Mavin records will be performing live on stage.

Mr Bumper 2 Bumper is known to put up an electrifying show and performance. He has a soulful and powerful voice which captivates his audience.
The starting acts will be Nicki Tall a.k.a Oyinbo Boy, Young Cryhme a.k.a Money Mendoza and Mpiece. On the tunetables will be DJ Bayo, DJ Madman, and DJ Homeboy.

Doors open up at 9PM German time (21UHR). Harlem Club & Nollywood Germany are the producers of the show. It promises to be the event of month and perpharps the year.

So come follow Mr Wande Coal bumper 2 bumper and spend his money while he entertains you.

Still no break for Vybz Kartel in his ongoing trial. A judge denied Vybz Kartel bail yesterday in relation to the murder of Clive ‘Lizard’ Williams.

Although Vybz Kartel was granted bail in his other murder charge last year, the dancehall star remains locked up after several unsuccessful attempts by his lawyers to secure bail in his murder charge in Williams’ death.
Vybz Kartel’s lawyer, Valerie Neita Robertson, argued that the deejay should be granted bail because of the numerous delays in the trial.
However, the prosecution opposed the bail citing its strong case against Vybz Kartel.
Vybz Kartel, born Adidja Palmer, along with Shawn Storm Campbell, Calvin ‘Moonie’ Haye, Kahira Jones, Andre St John, and Shane Williams are all charged with the murder of Clive Williams.
Detectives say Williams was murdered over a missing firearm and they have video evidence linking Kartel to the murder.
Vybz Kartel and his co-accused returns to court on May 27.
BP 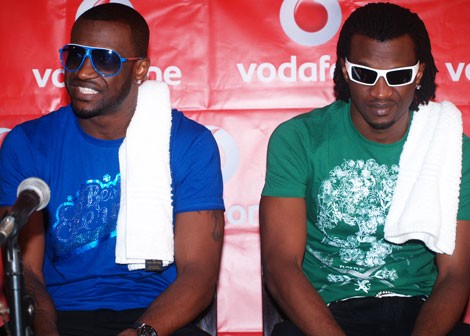 The unlawful detention of the Okoye brothers, Peter and Paul of P-Square fame, we gathered has led to them blacklisting the country as a no-go area never again.

Remember, the boys were allegedly detained at a Kampala five-star hotel over unpaid bills after a recent performance. The two had just performed at a concert dubbed “Chop my Money” before the ugly incident occurred.

According to the promoter, who was in charge of the event, the group was paid for the performance, accommodation and transport according to the signed contract.

However, their personal bills went beyond the agreed limit hence the problems. However, they have vowed never to go back there come what may. “We will not set our feet back in Uganda,” the twins are quoted to have said