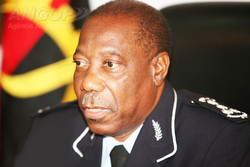 The Commander-General of the National Police, Commissioner Ambrósio de Lemos Freire dos Santos, may soon become one of the largest private arms dealers in Sub-Saharan Africa.

At stake is the importation of 95,000 arms from Brazil, including sub-machine guns, pistols, revolvers and riot control equipment destined for the National Police. The Commissioner's company, R & AB, has been brokering the deal with the Brazilian manufacturer Taurus since 2009.

According to its website, Taurus is "one of the three largest arms manufacturers in the world" and exports for more than 70 countries. The company, with offices in Florida, was recently classified as the fourth largest distributor of firearms in the United States.

In August 2009, as an urgent need arose, Taurus sold 2,600 pistols to the Angolan National Police at a total price of US $825,000. However, R & AB overcharged the National Police for the consignment of the pistols, which included the models PT917 and PT909 (9mm calibre) handguns.

Acting as Taurus's representative for Southern Africa, R & AB presented the buyer, i.e. the Commander of the National Police, Commissioner Ambrósio de Lemos Freire dos Santos, with an invoice in the value of US $1,500,000. Deducting about US $24,000 for air freight and insurance charges, R & AB overcharged the National Police some US $651,000.

In addition to this, the official records from the Brazilian government show a discrepancy in the number of arms sold. The Brazilian Ministry for Development, Industry and International Trade (MDIC) formally recorded the sale to Angola of 2,613 small arms, with a total value of US $863,967, and filed the transaction as having taken place in 2010. Therefore there is a discrepancy of 13 pistols between the official Brazilian figures and those recorded by the National Police.

What is R & AB? On January 24, 2008, commissioner Ambrósio de Lemos dos Santos set up the referred company in partnership with the Angolan businessman Raúl Mateus, better known as the owner of the Pomobel supermarkets' chain.

In its business profile, the company describes its activity as "long-haul overland transportation, group haulage, vehicle rental, general commerce, service providing, distribution of foodstuffs, fish, cattle and industrial material, as well as engaging in all sorts of secondary and complimentary activities to the principal activity, with the possibility of extending its activity into other branches of commerce, industry and any other legitimate business, subject to the partners' approval." The commissioner and the businessman hold equal shares of the company's stock.

However, R & AB undertook the deal with Taurus without having the pre-requisite importation licence or permit for arms dealing. Sources from the Ministry of Commerce indicate that the entire operation was carried out with special authorisation from the Angolan National Police General Command.

The Law of Public Probity defines as an act of corruption the acceptance of "any economic advantage, whether direct or indirect, on the basis of commission, percentage, gratuity or gift from an interested party, whether directly or indirectly, which can be affected or supported by action or omission on the part of a public servant in the course of his duties" (Art. 25, 1, a).

A source within the National Police confirms that the Brazilian company Taurus was well aware of the commander's corrupt scheme and even encouraged it in order to close the deal.

Besides, exportation of arms from Brazil always requires government authorisation, and this transaction with Angola was no exception. How can the Brazilian authorities have given a green light to the sale of pistols to Angola, by means of such a corrupt and simplistic expedient? The name of the commander of the Angolan National Police chief's name appears on the public deed of the articles of constitution of R & AB.

The unrestrained levels of institutional corruption in Angola, on a par with violence, have become the binomial for the exercise of authority by the current regime. Today, in Angola, to be a leader and to be corrupt are synonyms of patriotism. Corruption is the symbol of loyalty to the ruling party, the People's Movement for the Liberation of Angola (MPLA) and of servitude to José Eduardo dos Santos. He, as the supreme leader, is the principal enabler and beneficiary of corruption.

When corruption is discovered, those implicated do not resign, nor are they sacked. They remain merely at the whims of the President, who holds the impunity cards. This model is applied all the way down to the lowest level of public administration. Among corrupt people, nobody has the moral high ground to point an accusing finger. This is the reality of power and government in Angola