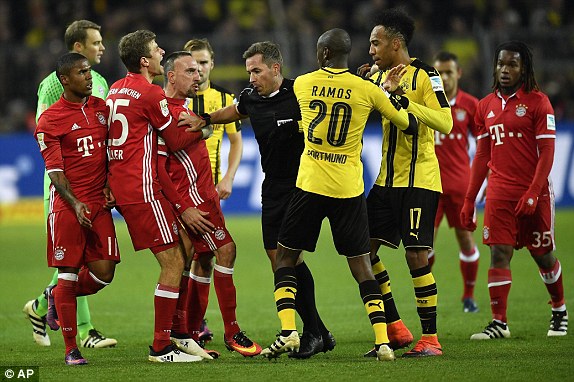 Bayern Munich and Borussia Dortmund clash on Saturday for the German Super Cup in a rematch of their Champions League final, with Dortmund denying they want revenge. Bayern's 2-1 win over Dortmund at London's Wembley in May meant Munich became the first German team to win the treble of European, league and cup titles, but Borussia are viewing the Super Cup showdown as a yardstick, rather than Wembley payback.

"This is not revenge for Wembley," said Borussia's Germany defender Mats Hummels ahead of the game in Dortmund

Borussia may have finished second, and fully 25 points, behind Bayern in last season's Bundesliga, but Hummels added: "For us, it is a good test to know where we stand, but we won't base our motivation on the fact that we lost in London."

With the new Bundesliga starting on August 9th, bragging rights are up for grabs in this pre-season showdown, but much has already changed for both teams since Arjen Robben's late winner at Wembley.

Bayern coach Jupp Heynckes has been replaced by ex-Barcelona boss Pep Guardiola, Spain under-21 captain Thiago Alcantara has been recruited from the Camp Nou and Germany midfield star Mario Götze has joined from Dortmund.

Illness or injury means neither are due to start at Dortmund's sold-out Westfalenstadion, with a crowd of 80,645 expected.

Mkhitaryan is out for the next few weeks having torn ankle ligaments in a pre-season match, while Aubameyeng, along with Poland winger Jakub 'Kuba' Blaszczykowski, is expected to be on the bench as he recovers from a stomach disorder.

Between them, Dortmund and Bayern have won the last four Bundesliga titles and there is much global interest in the match, which will be broadcast in 195 countries.

While Dortmund will start without their newly-signed trio, Bayern's star-studded squad will be at virtually full strength.

The European champions have won all nine of their pre-season friendlies at a canter, seeing off Catalan giants Barcelona 2-0 in Munich in Wednesday's friendly.

Guardiola has ten full internationals in his midfield and has said he will meet club bosses after Saturday's match to discuss whether any players should be sold before the transfer window closes at the end of August.

Brazil midfielder Luiz Gustavo has been linked to Wolfsburg, while Premier Legaue side Liverpool are reported to be interested in Swiss winger Xherdan Shaqiri.

Both sides have played down the bad blood which flowed between them earlier this year, especially following the April announcement that Götze had activated a clause in his contract to join Bayern.

"Last season, there were one or two irritations, but they were dealt with publicly or internally," said Dortmund's director of sport Michael Zorc. "We would do well to just talk about ourselves."

In February, Bayern's president Uli Hoeness had boasted "the status quo in Germany has been restored" after Munich beat Dortmund in the German Cup quarter-final.