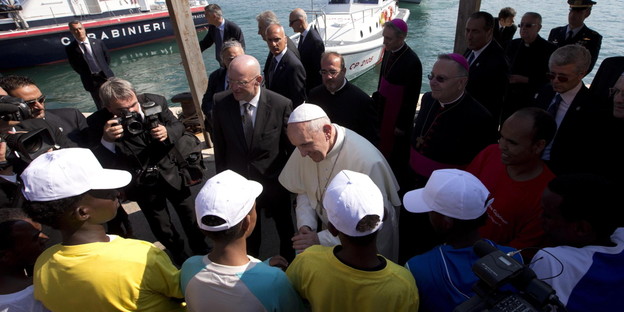 Pope Francis on Tuesday called on countries to protect migrants, condemning the treatment of refugees as mere "pawns on the chessboard of humanity".mCountries should cooperate on "the broad adoption of policies and rules aimed at protecting and promoting the human person", he said in a message for the World Day of Migrants and Refugees.

"Migrants and refugees are not pawns on the chessboard of humanity," he said in the message titled "Towards a Better World".

"They are children, women and men who leave or who are forced to leave their homes."

He slammed situations in which migration is propelled by human trafficking and enslavement, warning: "Nowadays, 'slave labour' is common coin."

The Argentine pontiff has made defence of the poor and vulnerable a keystone of his papacy.

His first trip outside of Rome earlier this year was to the tiny Italian island of Lampedusa, where thousands of migrants regularly wash up in pitiful states after hazardous crossings from Africa.

Some are then coerced into the sex trade or forced labour by criminal gangs.

A recent UN report found that Italy must do more to tackle the problem of human trafficking, saying the situation in the country was worsening.

The International Organisation for Migration (IOM) estimates that some 800,000 people may be trafficked across international borders annually, with many more trafficked within the borders of their own countries.

The next World Day of Migrants and Refugees is not until January 19, but the Vatican sends out papal messages on such subjects well in advance to provide guidance to pastors around the world.

In the message, the pontiff also urged government leaders to "confront socioeconomic imbalances and an unregulated globalisation, which are among some of the causes of migration movements in which individuals are more victims than protagonists."

"No country can single-handedly face the difficulties associated with this phenomenon, which is now so widespread that it affects every continent in the twofold movement of immigration and emigration," he said.

Fleeing "situations of extreme poverty or persecution... millions of persons choose to migrate."

"Despite their hopes and expectations, they often encounter mistrust, rejection and exclusion, to say nothing of tragedies and disasters which offend their human dignity," he added.