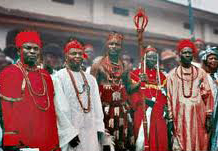 The 6th of July 2013 was the day the misconception in Igbozurume Hamburg and the "Ezeship" controversy was brought to the fore and laid to rest. It was the day members of union from the northern sector of Germany gathered for a general meeting to strategize on the upcoming "World Igbozurume Convention" billed to take place on the 18th of August 2013.

The meeting that took place at the victor’s dinner in Hammer brook saw the Igbozurume general secretary Germany (Ambassador Godson Nwosu) and the chairman of Igbozurume North (Mr. Chris Bernard) respectively giving detail explanation on the intention and objective of the organisation, to its teeming members.

It would be recalled that for sometime now Igbozurume Germany is engulfed in "Ezeship" controversy with different factions making counter claims. At the heart of the issue was the accusation by some group of people that a prominent and respected member of the socio-cultural organisation, Dr. Peter Godwin Onwukwe, "Ezeigbo Igbozurume" Germany failed to fulfil some financial promises which lead to disagreement with his former loyalist.

As a TopAfric Radio reporter, and by the then non- member of the organisation, I attended the meeting to get first hand information on what the organisation stands for and to access the pros and coins. Early I had the opportunity to attend another Igbozurume meeting led by Nze Afam Dike, who is the arrow head of the breakaway faction.

I was fascinated and honoured that (Igbozurume Convention) is about to take place in my backyard. At the gathering I found out what Igbozurume actually stands for.

In broader perspective, Igbozurume is targeted at bringing together all the Igbo speaking people within and beyond the core five Igbo states, primarily to rekindle and reclaim back the lost grounds occasioned consequently as a direct fall out of the Nigerian/Biafran war (1967-1970) that ravaged its people mainly socially and politically.

In other words, Igbozurume , though a socio-cultural organisation and  non political in structure, yet has an overt/covert political lining with propensity to solicit for Nigerian presidency of Igbo extraction come 2015. This it wants to achieve by reuniting, reconnecting and reintegrating the Igbo nation with a clear mission to fight for her rights and aspiration within the Nigerian geo-political space.

In addition, Igbozurume by its original structure recognises the importance of traditional institution as a platform to garner support for its ambition. It equally encourages within its membership the idea of "Ezeship" stool, amongst Diasporas community to further build a rallying point for the Igbo community, find world wide. By that initiative, has symmetrically disclaim the ranting slogan from "IGBO ENWEIGH EZE“ to "IGBO NWERE-EZE".

For years now, Igbozurume has firmly being established in many countries world wide with branches in 36 states in Nigeria, GHANA, US, BRITAIN, FINLAND and other countries in Asia. The introduction of Igbozurume in Germany was chiefly to re-integrate many who are not updated as to developments back home.

Many at times governmental institutions in Nigeria has fend ignorance of our intellectual/organisation ability to partake in a schemes mapped out for Nigerians in Diaspora, who are mostly labelled as car and spare parts dealers, thus potentially limiting our chances of making positive contributions to our dear country Nigeria.

Since the return of democracy to Nigeria 1999, Governments, both state and national has recognised and recommended people in Diaspora for elective and appointment position without due consultation to Nigerian living in Germany.

Igbozurume by and large are disposed to make in-roads for German/Igbo community to be part of the relevant Diaspora community to reckon with, in Nigerian socio-political culture.
These and many more are some of the advantages the Igbozurume Germany stands to benefit, should we solidly and formidable put up a strong organisation in place the way our Diasporas counterparts in US and Britain are doing.

That includes electing the "Eze" throne as required by Igbozurume structure worldwide, irrespective of who becomes the beneficiary.

At this point having captured my mind on the true meaning and the intent of Igbozurume structure world wide, let me say the "Igbozurume World Convention" coming up soon would be a litmus test to all Igbo’s living in Germany whether we like it or not.

The important of this convention carry a burden that requires no rebellion or ifeajuna mentality. So, if we the marginalized Igbo’s think we are on the right track in restoring the lost grounds as all agreed, then there would be no need to divide Igbozurume in Germany in many factions.

This is the time to show some sense of ONYE AGHALA-NWANNE YA slogan in us. To whom honour is due lets give to him. If one of us has merited/crowned the Ezeship as the structures in principle advises, let us stop at nothing to crown/recognise that person hence the new slogan "IGBO-NWERE EZE"

Ezeship is not a taboo,and will never be; its numerous advantage are hinged on homage, relevancy, govt recongnition/patronage, ralying point and unity of purpose.