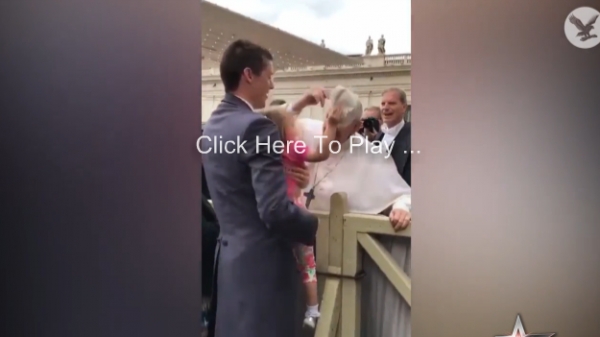 A little girl was caught on camera stealing the Pope's skullcap as she gives him a kiss.
The video was shot by the girl's Godfather with the caption: 'Took my Goddaughter to meet the pope. She stole his hat.'
Pope Francis scrambles for the hat, but is all smiles as he re-adjusts his uniform and the girl, named Shirley, is carried away.

The huge crowd erupted into laughter after the girl's sneaky swipe.

It is not the first time he has lost his headwear to a curious child.
As the pontiff held a youngster in his arms while visiting a medical centre back in 2013, the cheeky child took off his white zucchetto at the Vatican.

For a moment, it looked like the cap-snatcher had an amazing souvenir - but, with a smile, the leader of the Catholic Church retrieved his headwear and returned it to its rightful place.