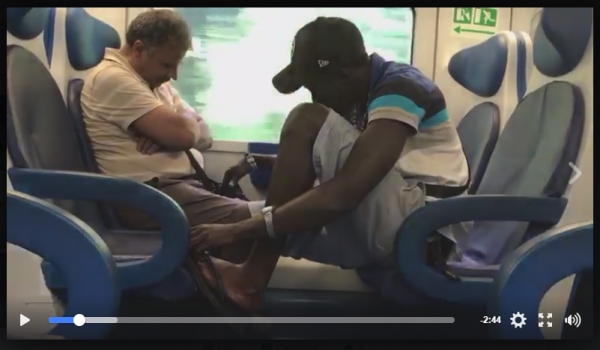 Gamian Boy in Italy filmed stealing from a Passenger

A young Gamibain Boy sitting in front a sleeping passenger in front of him was filmed stealing items from the sleeping Man`s bag.

He continues to go back to the sleeping mans bag and reach even deeper in hopes of finding more steals. Meanwhile, he was un-aware of some other passenger filming his entire activities.

Eventually, the Man wakes up and although he doesnt realize that the boy had taken a few of his properties, he screams at the boy and startles him to get up and walk away.

But the man doesnt seem to realise that his properties were taken even after looking inside his bag.

Social media has identified the boy as a Gambian boy and its only a matter of time before he is fished out.

People are urging the boy to give back what he took from the man before it is too late for him.

This occured somewhere on a train in Italy.   City is still unknown.