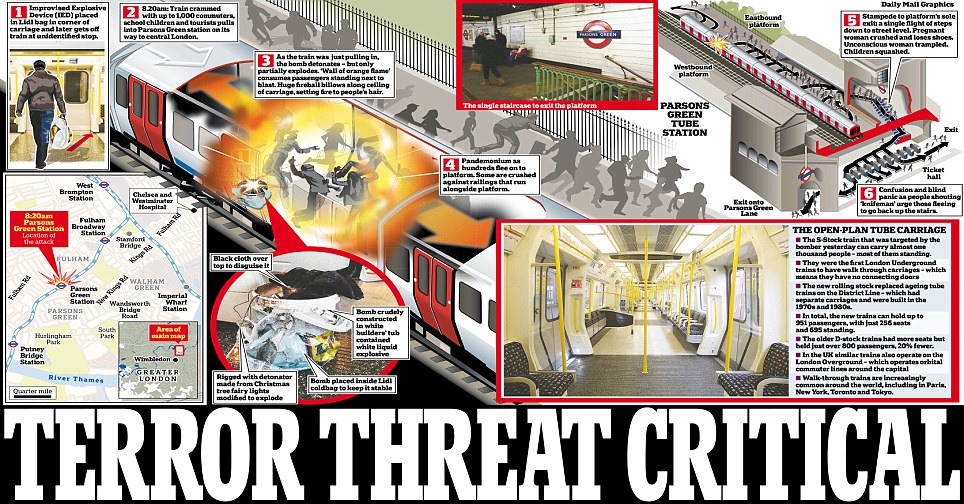 Armed police have flooded London's streets as the terror threat level was raised to critical amid fears the Parsons Green bomber could strike again. The introduction of Operation Temperer will see soldiers replacing police at key sites including nuclear power plants to free up extra armed officers for regular patrols.

Scotland Yard said it is making 'excellent' progress in hunting the suspected terrorist who set off a crude bucket bomb on a packed commuter train by Parsons Green tube station in west London at 8.20am.

It was the middle of rush hour when the crude bucket bomb - which had a timer - went off at 8.20am inside a tube train packed with commuters, including children and a pregnant woman. The device was hidden in a builder's bucket and could have killed dozens but failed to properly detonate and sent a 'wall of fire' through the carriage at Parsons Green, injuring at least 29 people.

Terrified passengers were left covered in blood with scorched hands, legs, faces and hair - others suffered crush injuries during a stampede as they 'ran for their lives' over fears the 'train would blow up'. There are concerns the open-plan tube carriage the bomb went off in helped spread the fire.