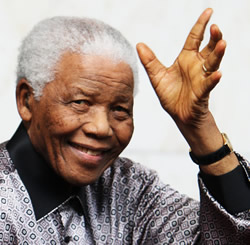 According to an unconfirmed report to TopAfric.com from a reliable source he died this Afternoon.

Former South Africa President Nelson Mandela spent four days in Hospital on Monday after being admitted for a fourth time since December of last year, Mandela was fighting a lung infection that seems to be taking its toll on him.

Before he became the South African president in 1994,Mandela spent 27 years in Robben Island prison, where according to information available to TopAfric.com contracted tuberculosis, it is believed that the disease permanently damage his lungs, indirectly leading to the numerous infections he has suffered since retiring from public life in 2004. 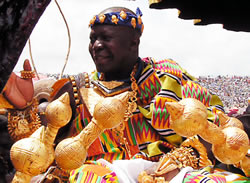 “I speak of the compulsive and obsessive politicisation of our society, which now virtually compels us to look at every issue from the narrow and darkened prism of party politics”. The practice does not give room to independent thinking and must not be allowed to fester, he observed.

He said it can be dangerous for the country’s democracy if this is allowed to fester.His comments formed part of his lecture delivered during this year’s Democracy Lecture organised by the National Commission for Civic Education (NCCE)on the topic: “Advancing Together”. Otumfuo Osei Tutu II said the serial caller phenomenon has “pushed Ghana into an age of the howlers’.

He noted that politicians “in and out of government” were inflicting irreparable damage to each other.“Who was funding the serial callers, he asked rhetorically and said “it is the same politicians whether they call themselves communicators or propagandists”.

He said by funding the “blatant lies and malicious gossips” spewed out by so-called communicators and serial callers, politicians were killing sound scholarly discourse.This resulted in a situation where “perpetrators jump in glee” while “victims frets with anxiety”. 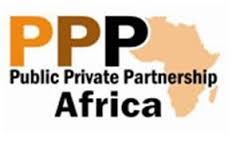 African Development Bank (AfDB) Press Release
For over four decades, the African Development Bank Group (AfDB) has been involved in Nigeria's development process. In assisting the country it has been employing a full range of sovereign and non-sovereign instruments including private public partnership (PPP). The Bank's Private Sector Department in particular has been playing active role in mobilizing other investors and leveraging third-party co-financing investments.

As AfDB unveils its 2013-2022 Ten Year Development Strategy, anchored on Africa's economic transformation, Nigeria's development agenda will continue to rank high for the Bank. Nigeria's infrastructure including power, transport and water supply will remain one of the key areas in which the AfDB and Nigeria will be collaborating for a common transformation goal.

In this regard, the Bank's Country Strategy Paper (CSP) 2013-2017and Nigeria's Vision 2020 will provide a joint framework for collaboration. The framework boldly embraces the future and will help reduce the country's development deficit at least on infrastructure side.

A number of Bank funded infrastructure projects clearly advance Nigeria's aspirations to be among the top 20 economies in the world by the year 2020. While focusing on the aspirations the two vision documents will primarily contribute to Nigeria's achievement of the Millennium Development Goals, as well as enhance the country's development sustainability.

AfDB's core infrastructure projects in power, transport and even in water supply have traditionally played obvious catalytic roles in the past. The ones hereby outlined will not be less effective as they are designed to align both the key pillars of the Bank's Ten Year Strategy and Nigeria's Vision 2020 goals. 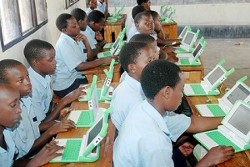 The Jubilee Coalition pledged free solar powered laptops to children joining Class One in 2014 during their campaign rallies. They treated it as their pet project and promised to roll it out once they got into power.

Going by Jubilee's elaborate and digitally-propelled campaigns, even it's avowed critics cannot deny it's capacity to deliver on this ambitious project and hence the analogy of 'the digital versus analogue duel' catchphrase that marked its campaigns.

The proponents of this project continue to say that it is a noble idea targeting to birth a new tech-savvy generation that will be compliant with the dictates of this era.

Buoyed by the success of Narc's Free Education Program that took off in 2003, these proponents are convinced beyond a shadow of a doubt that it will become a reality.

They further remind the naysayers that the Millennium Development Goals and Kenya's Vision 2030 are anchored on technology and science. Rwanda with a Gross Domestic Product of 644 billion shillings against Kenya, the East Africa's leading economy with a GDP of Kshs 3.1 trillion has managed a laptop revolution titled One Laptop per Child (OLPC).

It's geared into moving Rwanda from the humanitarian assistance phase associated with the 1994 genocide into one of sustainable development. It appears there's no stopping for this ambitious project by the Jubilee Government if Rwanda can afford it.

But why the divergence in views among Kenyans? Where some praise it as a noble cause, others oppose it as untenable. A sure guess is in its implementation. It's an implementation that sounds like the what-came-first-between-the- egg-and -chicken complex.

The opponents of this project say that the cost implications are prohibitive. The Kshs 150 billion annually for solar powered laptops to the 800,000 children joining Class One yearly at the expense of emergencies like ensuring food security, upgrading the infrastructure that has received a bashing from the floods, effecting devolution and handling issues affecting women and youth. These demands are a nightmare to Kenya's fledgling economy.

In an era where gambling with reality is tantamount to committing suicide, the critics of this project say that it should not be implemented until measures are put into place to develop this human resource(read teachers) on computer literacy. 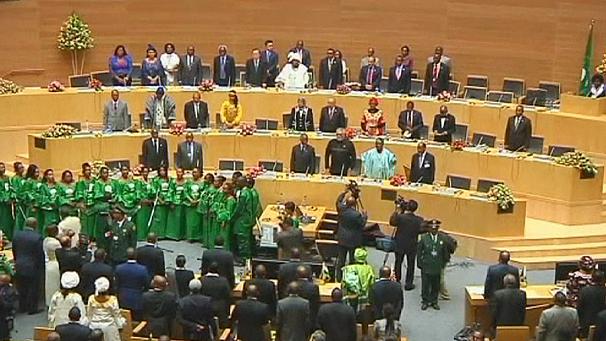 Arusha — The African Union is calling for the International Criminal Court to drop cases against three Kenyans, including President Uhuru Kenyatta and Vice-President William Ruto. This came in a resolution adopted Monday "by consensus" at an AU summit in Addis Ababa.

Kenyatta and Ruto were elected in the first round of presidential elections in March, despite crimes against humanity accusations against them. ICC Prosecutor Fatou Bensouda accuses them of having played a key role in post-election violence in 2007-2008 in their country.

Speaking at the end of the AU summit on Monday, Ethiopian Prime Minister Hailemariam Desalegn accused the ICC of targeting Africans.

He said the ICC had been formed more than a decade ago to end the culture of impunity, but "now the process has degenerated into some kind of racial hunt".

The Ethiopian Prime Minister, who chairs the AU, said African leaders were concerned that out of those indicted by the ICC, "99% are Africans". "This shows something is flawed within the system of the ICC and we object to that," he said.

AU Commission President Nkosazana Dlamini-Zuma of South Africa said that now Kenya has introduced reforms to its justice system, Kenyan courts should be allowed to take the ICC cases.

President Kenyatta's trial is due to start before the ICC on July 9. Ruto's case was due to start this month but has been postponed, with a new date still to be set. The two men have so far appeared voluntarily before the court. Bensouda has threatened to issue arrest warrants against them if they do not continue to do so.

However, in March Bensouda had to drop charges against another prominent Kenyan, former Cabinet Secretary Francis Muthaura, saying a key witness had recanted evidence while others were "too afraid to testify for the prosecution".

The AU resolution cannot force any action from the ICC. Only the UN Security Council can request a suspension - although not a withdrawal - of ICC procedures.

"In any case, Bensouda's task will be a tough one," one Kenyan lawyer who did not wish to be named commented to Hirondelle. "It won't be easy to convince Kenyan witnesses to come and testify against their democratically elected President and Vice-President."

During a working visit to the African Development Bank (AfDB) in Tunis on 3rd May 2013 , Nizir Baraka, Moroccan Minister of Finance, and Chairman of the AfDB Board of Governors, welcomed the support of the Bank to his country's quest for green growth.

In his words, the AfDB is the country's leading partner. «The Institution works hand in hand with us and is the driving force of our economy towards green growth,» he said.

Baraka urged the AfDB to assert its role as leader in Africa's development before making an assessment of the state of progress of the preparations of the AfDB Annual Meetings to be held in Marrakech, Morocco from the 27th to 31st May 2013. « These meetings will be a turning point for Africa,» he concluded.

The President of the AfDB, Donald Kaberuka, welcoming the minister expressed satisfaction about the commendable relations between the Institution and his country, and laid emphasis on the volume and quality of the country's portfolio, making Morocco the Institution's leading client in the past years.

Baraka found the theme of the Annual Meetings, "Africa's structural transformation", to be very pertinent "for our continent poised to play a primal role worldwide." According to the Chairman of the Board of Governors, discussions on this subject will help illustrate best practices and define the modalities required for this transformation.

He expressed satisfaction about the remarkable enthusiasm surrounding the Annual Meetings which will be a "turning point for Africa." Addressing the Board of Directors, Baraka acknowledged the excellent financial results of the Bank and its initiative to establish an infrastructure fund.

The AfDB is the lead donor in Morocco with operations focused on infrastructure, human development, governance and energy. 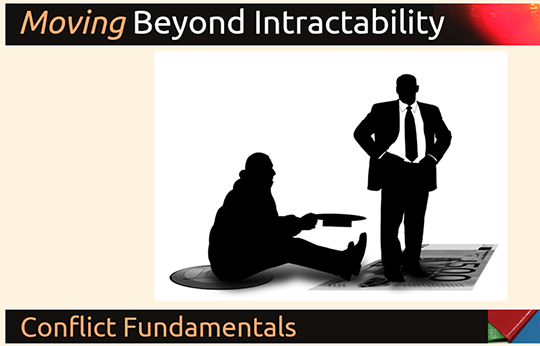 Luanda - The United Nations' top human rights official urged Angola's government on Wednesday to reduce the huge disparities between rich and poor that have developed in the oil-rich country despite considerable progress since the end of a 27-year civil war in 2002.

Angola, which is Africa's No. 2 oil producer, has posted rapid growth since the end of the war, but opposition parties and rights groups have long accused President Jose Eduardo dos Santos of doing too little to combat widespread poverty.

Speaking in the capital, Luanda, after a three-day visit, UN High Commissioner for Human Rights Navi Pillay praised the government for progress in rebuilding the country's infrastructure and clearing thousands of landmines.

“This development has not been without controversy,” she said. “Two issues that have consistently been brought to my attention are the huge disparities that have developed between the richest and the poorest, and the sometimes harsh methods used to evict people from land earmarked for development, especially in and around Luanda.”

Dos Santos, who has been in power since 1979, was easily re-elected last year for a new five-year term during which he has pledged to improve the distribution of Angola's vast oil wealth.

His government says it cut poverty levels to about 39 percent of the population in 2009 from 68 percent in 2002, and increased public spending in this year's budget by over a quarter to help improve social conditions.

Pillay said she stressed in a meeting with Dos Santos on Wednesday the importance of cutting the wealth disparities over the next four or five years.

She said, however, that the government must tackle alleged abuse - especially sexual abuse - of migrants by security forces and border officials that has persisted for the past decade, especially on the border with the Democratic Republic of Congo.

“During my visit to a remote border crossing in Lunda Norte, I received indications that sexual abuse of female migrants is continuing, as well as theft of property,” Pillay said.

Recognising that the irregular entry of tens of thousands of migrants every year, many seeking to dig illegally for diamonds, causes major problems and that the government has the right to deport them, she said it must do so humanely.

Pillay said other problems included implementation of laws on freedom of expression and assembly, including the “heavy-handed” suppression of protests, and the fact that millions of Angolans, including 68 percent of children under age 5, had not been listed in the national identification registry. - Reuters