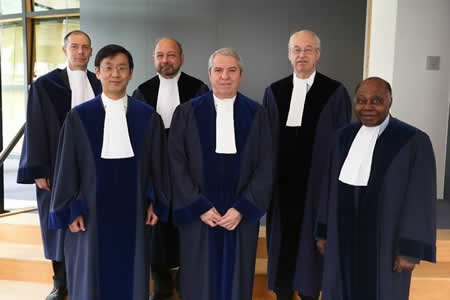 The Special Chamber of the International Tribunal for the Law of the Sea, constituted to deal with the dispute concerning delimitation of the maritime boundary between Ghana and Côte d'Ivoire in the Atlantic Ocean (Ghana/Côte d'Ivoire), will deliver its Judgment at 11 a.m. on Saturday, 23 September 2017.

Background
In September 2014, the Government of Ghana dragged Côte d'Ivoire to ITLOS in Hamburg, Germany, after the francophone neighbour began laying claim to some offshore oil concessions and adjoining seabed being developed and exploited by various companies, including Tullow Oil plc., within Ghana’s territory.

Ghana’s resort to ITLOS under the United Nations Convention on the Law of the Sea (UNCLOS) followed 10 failed attempts at negotiations between the two countries. Ghana wants ITLOS to declare that it had not encroached on Ivory Coast’s territorial waters. Ghana filed its suit based on Article 287 Annex VII of the 1982 UNCLOS.

Côte d'Ivoire, in February 2015, filed for preliminary measures urging the tribunal to suspend all activities on the disputed area until the definitive determination of the case, dubbed: “Dispute Concerning Delimitation of the Maritime Boundary between Ghana and Cote d’Ivoire in the Atlantic Ocean.”

Ghana maintained that Côte d'Ivoire began issuing threatening letters to oil companies operating in the disputed area after millions of dollars had been invested to develop the affected oilfields.Exploration and exploitation work on the Tweneboah-Enyera-Ntoumme (TEN) project being operated by Tullow Oil Plc., and its partners would have been affected had the tribunal ordered a suspension of all activities.However, in April 2015, ITLOS, in its provisional measures, said ongoing projects in the disputed fields, including the $7.5-billion TEN project could proceed while the substantive case was being dealt with, but ordered that Ghana should not start new explorations within the same fields.The provisional measures followed legal and technical representations made by both countries at ITLOS’s Special Chamber in Hamburg, Germany, on March 29 and 30, 2015, after which ITLOS ruled thus:THE SPECIAL CHAMBER,(1) Unanimously22Prescribes, pending the final decision, the following provisional measures under article 290, paragraph 1, of the Convention:(a) Ghana shall take all necessary steps to ensure that no new drilling either by Ghana or under its control takes place in the disputed area as defined in paragraph 60;(b) Ghana shall take all necessary steps to prevent information resulting from past, ongoing or future exploration activities conducted by Ghana, or with its authorisation, in the disputed area that is not already in the public domain from being used in any way whatsoever to the detriment of Côte d’Ivoire;(c) Ghana shall carry out strict and continuous monitoring of all activities undertaken by Ghana or with its authorisation in the disputed area with a view to ensuring the prevention of serious harm to the marine environment;(d) The Parties shall take all necessary steps to prevent serious harm to the marine environment, including the continental shelf and its superjacent waters, in the disputed area and shall cooperate to that end;(e) The Parties shall pursue cooperation and refrain from any unilateral action that might lead to aggravating the dispute.(2) UnanimouslyDecides that Ghana and Côte d’Ivoire shall each submit to the Special Chamber the initial report referred to in paragraph 105 not later than 25 May 2015, and authorises the President of the Special Chamber, after that date, to request such information from the Parties as he may consider appropriate.(3) UnanimouslyDecides that each Party shall bear its own costs.(signed) Boualem BOUGUETAIA, President of the Special Chamber (signed) Philippe GAUTIER, RegistrarBefore ITLOS’s provisional measures, Côte d'Ivoire had, in a 27-page application signed by its Minister of Petroleum and Energy, Mr Adama Toungara, urged the tribunal to also direct Ghana to refrain from granting any new permit for oil exploration and exploitation in the disputed area.

Côte d'Ivoire argued that it would suffer severe and irreparable economic injury if its request was not granted by the tribunal.

It also accused Ghana of attempting to prejudice the tribunal’s decision by going into the merit of the case with volumes of documents and witness statements, but Ghana faulted its neighbour for departing from the law, making baseless accusations, being inconsistent, and failing to produce witnesses and expert evidence.

Ghana also reminded Côte d'Ivoire of its lack of consistency and merit in filing for preliminary measures.

The absence of credible data and evidence from Côte d'Ivoire, according to Ghana, at the time, was due to that country’s handicap in producing factual documents to back its case.

Ghana, which was led by then-Attorney-General and Minister of Justice Mrs Marietta Brew Appiah-Opong, also reminded the tribunal of Côte d'Ivoire’s failure to challenge the evidence of its technical witnesses, which, according to it, tore Côte d'Ivoire’s case in shreds.

“We invite you to firmly decline the application before you,” Mrs Appiah-Opong said, with the argument that Côte d'Ivoire had failed to prove that Ghana had encroached on its territorial waters to warrant the stoppage of activities, including the exploration of oil in the disputed area, until the final determination of the dispute.

“There is no justification in law, logic, and fairness or on the evidence for the measures sought. They will be unprecedented, an invasion of sovereign rights that stand in the face of representations made by Cote d’Ivoire for more than four decades, on which others and we have relied,” she stressed.

Leading a team of local and international lawyers and technical staff from relevant agencies, Mrs Appiah-Opong told ITLOS’s five-member panel that “until Ghana was well advanced with its oil exploration programme on its side of the boundary, there were no difficulties”.

“At the time when Cote d’Ivoire had much more oil and gas production than Ghana, there were no claims about moving the maritime boundary,” she added.

“In 2009, Cote d’Ivoire started to make representations to Ghana about its desire to alter the boundary. Yet, its public position did not change. None of its inconsistent positions has any proper justification in law.”

Judges Mensah and Abraham were appointed by Ghana and Ivory Coast, respectively, in accordance with the rules of the tribunal.
The two countries ended their oral submissions in February 2017.