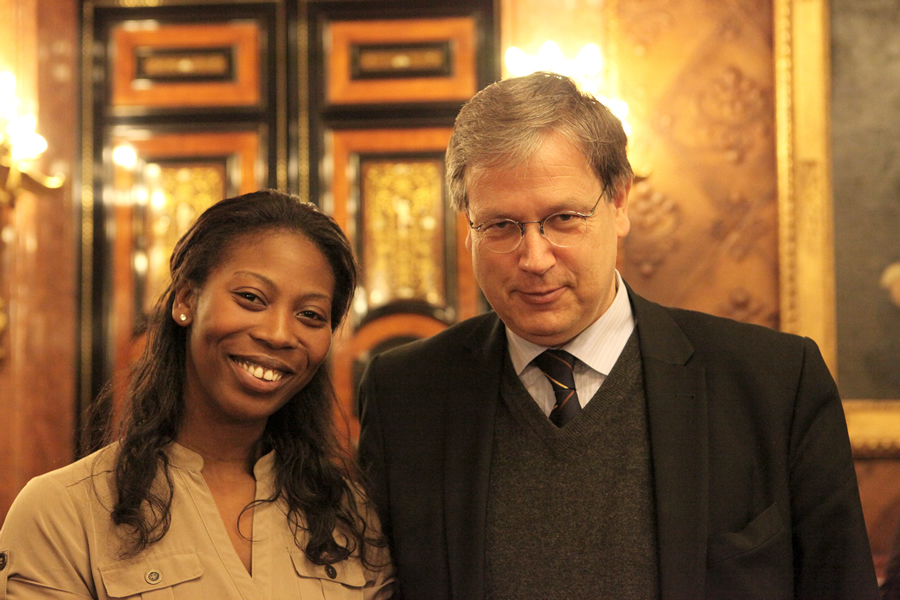 Social Work is giving back to the Community ,  Received certificate of recognition from Fr. Bundespräsidenten Horst Köhler in -2009 for her  special social engagement -

Irene Appiah could be correctly described as a lady with many talents and there are enough reasons to do so. She is the Co- founder of „Bildung ohne Grenzen e.V.“, an NGO that focuses on educational development of people with immigration background. She was able to organize Motivational workshops in cooperation with initiatives from the Hamburger Senat which eventually brought her a special certificate of recognition in 2009 from the former Bundespräsidenten Horst Köhler for her special social engagement, and that is not all.

She is  also working as a legal case coordinator at Wyccon Europe GmbH that specializes in court reporting and transcription of political debates/parliamentary protocols such as: Federal Court of Justice, Karlsruhe, German-French gathering in order to honor Charles de Gaulle and his initiated German-French youth-pact, with Angela Merkel and President Francois Hollande.

She is equally an associate of ConVotex (GbR) together with her partner Kimberly Turnage, they are responsible for advocating, speaking and consulting on the benefits of implementation of live, real time, voice to text communication access services which provides equal access for: Deaf or Hard of Hearing people; as well as provide improved productivity during international events, like, the United Nations and International Information Technology Conferences throughout Europe, the Middle East and Africa.

Since 2010 Irene Appiah is responsible for the planning and implementation of  the “Motivationsworkshop” – part of the  Bündnisplan project. With help of selected mentors who mostly have gone the same or similar ways in growing up in Germany, they share their experiences of being seen as foreigners with the students in school but at the same time showing them how they are able to use the advantage of having foreign roots in order to make a successful professional standing, even in Germany.

Born in Hamburg-Altona in 1976 her parents of Ghanaian origin who later moved to Hamburg- Billstedt before she turned one years old and grew up in the suburb of well known “Brennpunkt: Sonnenland”. She was basically a child of the now so-called school system of the “Stadtteilschule” formerly known as Gesamtschule, which just got re-implemented into the school system back in 1986 under the then Hamburger Mayor, Henning Voscherau.  She attended the Grundschule An der Glinde Au from 1982 – 1986.  From 1986 – 1995 she got admitted to the Gesamtschule Öjendorf and made a transit to Gesamtschule Horn for her A-Levels. During her time at the Gesamtschule Öjendorf only 9 students received the A-Level qualifications. 7 males and 2 females. Only 2 from the 9 students are with immigration background and Irene Appiah was one of them.

After her A-Level she move into the music business but decided in 2003 to take up the study of law. Studying law as a single mother was never easy as she had to financially support herself, her son and her parents.

It was during her internship with lawyer, Ama-Pokua von Pereira, that the two quickly became a team in the field of law and social work. Since that time, Irene has been totally in love with social work and how caring can impact a person’s life. “Social work is one of the ways of giving something back to the community „she said. Because she has seen what the difference changed individuals can make, she has decided to encourage others to make changes for the better by going into politics. As a member of SPD and a stronger supporter of the African Consultative Forum “ACF” concept, she is joining the new breed and new faces  of Africans in Hamburg as she navigate her way through the current bureaucratic jungle in giving  the Community a Voice