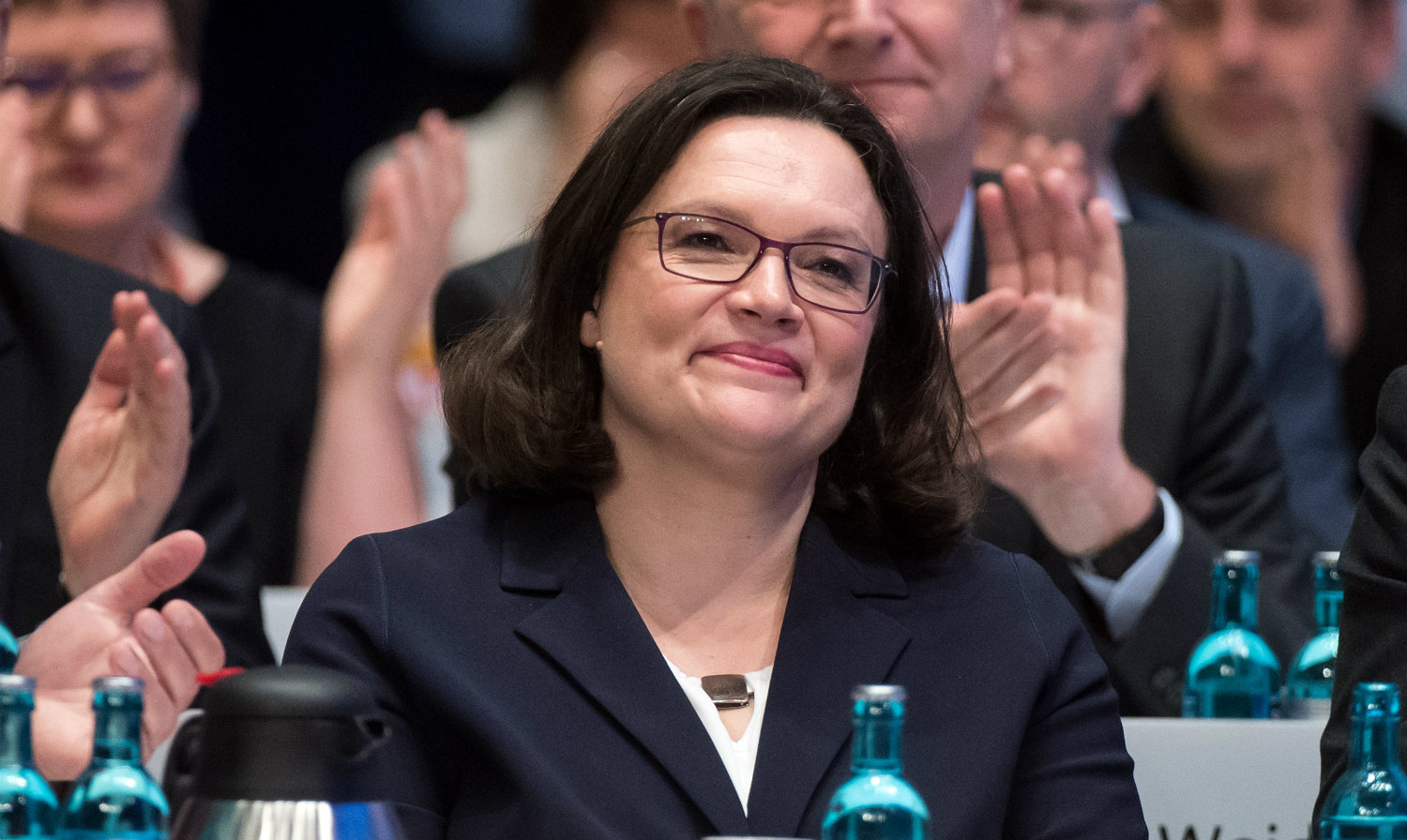 Germany's centre-left Social Democrats on Sunday elected Andrea Nahles, a combative and outspoken former labour minister, as the first woman leader of the 155-year-old party.
Known for her lectern-thumping speeches and occasional outbursts of child-like humour, the 47-year-old single mother joins Chancellor Angela Merkel at the top of German politics -- and as the woman who may one day seek her job.
"We're breaking through the glass ceiling in the SPD," said Nahles at the delegates' meeting in the city of Wiesbaden. "And the ceiling will stay open."
Well-connected within her party, Nahles, a former leader of its Jusos youth wing, won 66 percent of the vote, beating Simone Lange, 41, an ex-policewoman and mayor of the city of Flensburg.
The less than stellar result against an outsider reflected lingering resentment within the party against the decision, strongly promoted by Nahles, to once more govern as junior partners to Merkel's conservatives.
Electing a female leader is "a sign of progress that was long overdue," said the SPD's outgoing interim leader, Finance Minister Olaf Scholz, who called it "a historic moment". In the lead-up to the vote, well-wishers had ironically expressed hope that Nahles would do worse than her predecessor Martin Schulz.
A repeat of his 100-percent party backing last year amid a euphoric "Schulz hype" would be seen as a bad omen given that in the end, he scored just 20.5 percent in the September 2017 general election, the party's worst post-war result.

While Schulz's roller-coaster ride in German politics has shuddered to a halt, the task of revitalising the dispirited SPD now falls to Nahles.
A survey last week by Infratest dimap found that 47 percent of respondents doubted that the party veteran is the right person to lead a "renewal", while just one third expressed confidence.
The challenge for her labour party now will be to at once govern responsibly with Merkel, and convince its dwindling band of working-class voters that it is still their champion.
Nahles vowed that the SPD will fight for social justice and welfare, declaring that "solidarity is what is most lacking in the globalised, neoliberal, turbo-digitalised world".
She pledged a fight for decent wages as technology destroys traditional jobs, and a pro-EU foreign policy that also emphasises pacifism and international cooperation.
Nahles, from the party's left wing, scored some landmark successes under the previous Merkel coalition government, notably in introducing a minimum wage.
When voters declined to reward the SPD for such gains, the party initially vowed a muscular fight from the opposition benches.
Nahles at the time summed up the SPD's combative spirit against the Merkel government with a street brawler's phrase, telling journalists that "from tomorrow we'll smack 'em in the face".
When it turned out the SPD would likely rejoin Merkel after all, but drive a tough bargain in the process, she used a kindergarten taunt that loosely translates as "na-na na-na boo-boo".
It was not out of style for Nahles, who once mocked Merkel's party in the Bundestag with a slightly off-key rendition of the reality-denying theme song of Swedish children's book hero Pippi Longstocking.
While some find such performances grating, few underestimate Nahles, who, like Merkel, is considered a sharp strategist, hard worker and bareknuckle political operator.
When she invigorated her party with a passionate speech in January, the tabloid-style Bild daily paid her the questionable compliment of being "the only real guy" in the SPD.
Nahles, the daughter of a bricklayer, hails from a small village in the rural Eifel region where she still lives in her great-grandparents' farmhouse with her young daughter.
A church-going Roman Catholic, she has described herself as a conservative at heart, albeit one who fights for working-class people.
Nahles wrote in her high school yearbook that one day she wanted to be "either a housewife or chancellor".
She founded her party's first chapter in her home village and, while studying German language and literature, joined the SPD youth wing, which she headed from age 25.
In her career since, she has been a key figure in several crucial power plays and fought former chancellor Gerhard Schröder's Agenda 2010 welfare cuts, telling him she had no time for "political machos".
Most recently she sidelined the two men who had dominated the SPD, Schulz and former foreign minister Sigmar Gabriel. Both are now watching German politics from the parliamentary backbenches.