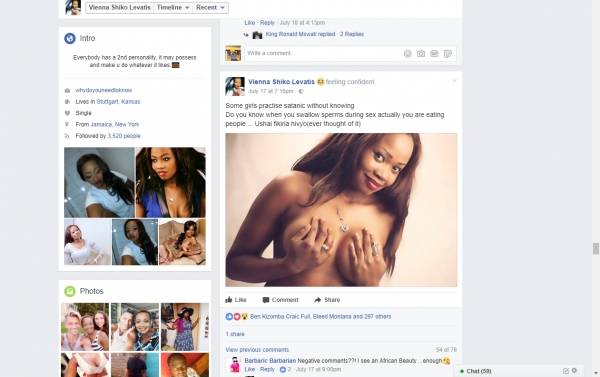 Irene, a former Miss Kenya Germany contestant, who goes by the name of Vienna Shiko Levatis on Facebook, says that "girls who swallow sperm during sexual intercourse are actually killing babies.

She wrote this statement on her facebook wall which started a huge controversial assualt of comments.

Someone disputed her claims by saying

"Not quite correct. Mainly, Spaerma consists of water and proteins dopamine, noradrenaline, tyrosine binding hormones oxytocin and vasopressin, as well as various estrogens, pheromones (odors). On the whole, nothing special, similar to a chicken egg"

Another person asked why she posed half nude while leaving this controversial statement.

She didnt or hasnt responded.

The question goes out to everyone out there. Is swallowing sperm the same as killing babies?