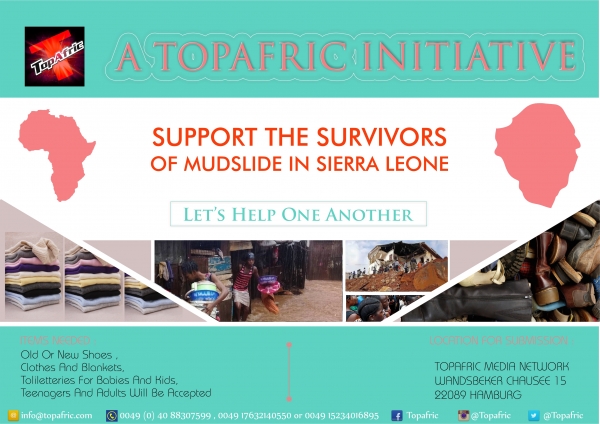 Sierra Leonian Embassy in Germany spoke to TopAfric on Wednesday, 23rd of August, 2017 on our airwaves. The interview focused on the TopAfric Initiative that was launched on Monday, 22nd August,2017 and how the Embassy was willing to support the idea.

We also had the presence of Madam Latoya Oloruntoyin Manly-Spain and Mr. Foday Touray both nationals of Sierra Leone,  join us in the studio on the issue. As the interview commenced, the spokesperson, Mr. Umaru Sahid Jah, Information and Communications Attaché at the Sierra Leonian Embassy in Germany, confirmed that the Embassy is currently receiving donations and financing the transportation of these items to Sierra Leone.

He further confirmed  the following ;

* That currently, there are 5,905 survivors in Sierra Leone who needed to be taken care of.

*That although Sierra Leone was receiving massive support in various forms from various humanitarian organisations and other institutions, they were still welcoming every and any help anyone can give.

Mr. Sahid Jah in his final words, encouraged the African community in Hamburg and beyond to come out and join hands with TopAfric on this humanitarian mission.

He further said, that all cash donatios should be made directly to the Embassy's account detalis available on   http://www.slembassy-germany.org

TopAfric would like to thank Madam Latoya and the Sierra Leone committe in Hamburg who have pledged their support to this course and welcome any individual or group who will voluntarily join in the collection, packaging and transportation of the donated items we are yet to receive.

Donate for a good course as this could happen to any country. To love is to give and in giving we recieve a blessing. God bless you all.

If you missed the interview, please visit our Facebook page ''TOPAFRIC'' for update on the information given by Sierra Leonian Embassy in Germany with reference to the situation in Sierra Leone now.